*If you are only interested in the 2020 SAA election, skip down to the other bolded sentence in this post. Tweets in this essay used with permission.

Last week I met Dr. Loretta Ross, who teaches at Smith College and is a founder of Sister Song. (I was more familiar with her work as a reproductive justice advocate, as opposed to her teaching on white supremacy, simply because Atlanta is the home of Sister Love, an affiliate of Sister Song). I meet a lot of interesting people through my job, but I really appreciated talking with Dr. Ross about white supremacy in general, and more specifically the perception of white supremacy.

During the show-and-tell portion of her visit, I showed her images from the Robert Langmuir photograph collection, which is made up of over 10,000 images of black life from the 1830s to the 1970s. I pulled a specific Klan photo from Georgia, from a town just outside of Atlanta. The image shows a group of uninitiated Klansmen (no robes) kneeling next to a table covered by an American flag. Behind it is one of the Georgia Klan’s famous, electric crosses. Other Klansmen, in full robes, mill about.

The men are shot from behind, so instead of their faces, you se the soles of their feet. And that’s why I pull the photo and teach with it often. Those soles are flawless. Each man has on shiny, clean-soled shoes. Most have on suits, and the one who does not has on trousers and a clean white shirt. They dressed up for their Klan initiation.

I like to teach with this image because it shocks students to see the KKK all dressed up like it’s Sunday. I barely started my story, when Dr. Ross said, “They aren’t all hayseeds with tobacco juice dripping out of their mouths.” I really appreciated her language. As a Southernist (my MA is in Southern Studies from Ole Miss, an epically racist school) who studied civil rights movements for my thesis, I get so frustrated with the image of racism as something overt, and Southern, and rednecked. In my academic work, and in my experiences, racism more frequently wears a decent suit and its church shoes.

Certainly none of this is earth-shattering news, but despite the suburbs electing Trump in 2016; despite the khakis and collars at Charlottesville; and despite the continued employment of Megan McCain as a public figure, I see many whites still clinging to the belief that as long as they are not dripping tobacco juice, they are not implicated in racism. This is the most special white privilege.

Of course, as a shaper of our world it is not just about “blackness” but an otherness of many facets. My mind tends to go to the black versus white dichotomy for many reasons, primarily personal experiences and where I live. And reducing whiteness to a construct is dangerous, if we do not carry the idea further to acknowledge that systems built on top of that construct are very, very real and have the capacity to destroy lives.

I live in Atlanta. This is a black city that I happen to love. My first job here was at a consortial library that serves four HBCUs. I loved my job there and many of the people who I worked with. I processed the papers of both Dr. Martin Luther King, Jr., and Tupac Amaru Shakur, two brilliant black men who struggled with their flaws but still inspire me. I am also from Austin, Texas, and grew up there in the 1980s and 1990s, a time period in which Austin was heavily segregated by race and by class (my understanding now is that thanks to gentrification, its just all white within the city itself), but pretended it was still a city of cool hippies. When I left Austin for Atlanta, in 2007, a man who had been my friend since high school kissed me goodbye and said, “Don’t start burning coal.”

That comment from a friend is my symbolic break with “whiteness.” It hardened my heart. This information is not meant to be a way for me to shout “I love black people!” but more so a way for me to say, I do not give a fuck about my whiteness. It bores me on a daily basis and I will not allow it to slow down my life or my work by needing to be constantly protected.

Your whiteness, on the other hand, actively disgusts me.

*This is where you should start reading if you only came here for comments on the 2020 SAA election.*

I am currently on the ballot for Vice-President/President Elect of the Society of American Archivists (SAA). Until yesterday evening, I was running against one other candidate. Today, by virtue of a petition, I am running against two candidates.

This is acceptable to me from a procedural position. It is in SAA’s by-laws that a petition of 50 members in good standing may introduce another candidate. However, a lack of information available about the reason behind this position has led to some speculation online.

When I heard that a third candidate had been put forward, and who it was, I assumed that this was a matter of gatekeeping. It had been decided by the “elite” that it was her turn, dang it! And since the Chair of the Nominating Committee did not play their role and nominate the “correct” candidate, something had to be done.

In reviewing the names of the SAA members who signed this petition, I admit that I was surprised. I know many of those people (one I had even considered a mentor and it was a shock that they clearly did not feel anything toward me), and not one of those people I know had reached out to me to find out why I was running for the position, or what I planned to campaign on or hoped to accomplish. They just signed and ended any pretense of respect for me. I was even more surprised when I read some of the rationale for the petition from a Tweet, 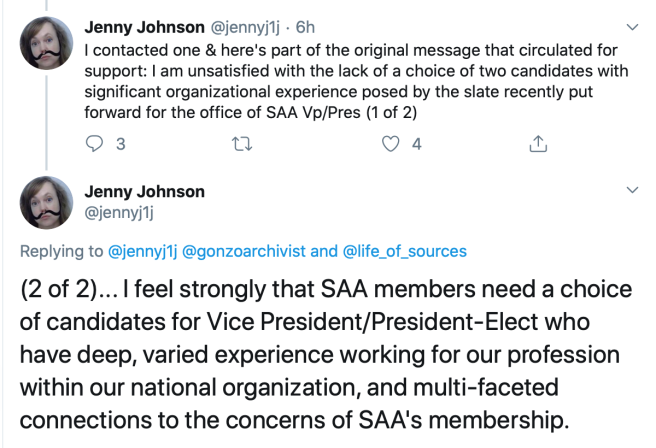 This rationale for the petition states that I do not have,

What do these three points mean? I spent ten years on the board of a regional organization, the Society of Georgia Archivists (SGA), including terms as Vice-President, President, and immediate Past-President/Nominating Committee. I founded the position Outreach Chair. My primary contribution (as I see it) was initiating SGA’s first strategic plan.

I am co-founder and member of the Atlanta Black Archives Alliance, a multi-institutional partnership.

I also served a term on the Board of Regents of the Academy of Certified Archivists, as Regent for Outreach. Within SAA, I have been a Section Chair (Archives & Archivists of Color), other Section leadership, Host Committee Chair for the most recent annual meeting in Atlanta, and a three-year term on SAA’s Council (with my final year on the Nominating Committee). As a Council member, I have had three truly proud moments: voting not to go back to Austin; writing the text of the Exemplary Service Award for Documenting the Now; and drafting the text of the Council endorsement of Protocols for Native American Archival Materials.

But according to this petition, this amount of service is not “significant,” “deep,” or “varied.”

“I think it will be critical to put a slate of candidates together that will have a strong portfolio of success in making room for historically underrepresented identities in leadership positions, who advocate for success of these communities and are willing to call out and address discriminatory practices within the profession and in spaces supposedly designed to nurture and support emerging leaders and change agents.”

I accepted the nomination for Vice-President/President-Elect because I felt honored to be asked. I felt that my record as an archivist, and my voting record on Council were why I had been asked, and I said yes.

My time as a member of SAA Council was a difficult one. It was emotionally draining. From my very first meeting (where I was not yet seated, but invited to observe and learn the ropes), I witnessed almost constant racial tension, the bullying of duly elected members of color, and white privilege in some of its most insidious forms. The most offensive to me personally being the use of White Woman Tears as a way to win points in a legitimate disagreement. I am also a white woman. You can not trick me with this.

I was more than proud when my Council “class” which was all-white, was followed by two groups that were not. Now that my group is gone, Council is wonderfully diverse in many ways: race, gender, sexuality and even the Holy Grail of institutional affiliation. I was delighted when the new Council ballot was published; there is only one white woman candidate.

And that, my friends, is the real hitch. The ballot has none of theirs on it. The next President will not have a stacked Council and with the VP/P ballot as it stood, would not have an automatic ally in that position either. Something needed to be done, and so it was.

I believe that we have a third candidate, not because the current ones are unqualified, but because this ballot poses a threat to white privilege within SAA. The Chair of the Nominating Committee is a black woman, therefore her choices are suspect. The white woman VP/P candidate is a race traitor. I can not be relied on to uphold the white standard; my tears are private. And the most privileged in our profession have fallen in line to protect that standard in their shiniest shoes.

I am from the South. And for generations white Southern women have strategically placed themselves at the top of every pile. We are taught to do it. We live it. We see it.

Did you think I didn’t hear the implied threat when that white man told me not to become a coal burner?

I heard him. And I hear you. And it hardens my heart.

So from the bottom of my white, Southern woman’s heart, I am running for Vice-President/President-Elect of the Society of American Archivists. And fuck all y’all.

I live in Atlanta, GA. I work as an archivist, but this site represents my own views and thoughts, not those of my employer. View all posts by toxicarchivist

No really, I’m asking. Am I inspired and great and full of good intentions, or am I a failure creating wreckage? Why won’t my brain let me be just one of these?